Editor’s note: This post is from three of the 5 students from Amalie Skram high school in Bergen, Norway, who were chosen to join the REGIMES Team in Longyearbyen, Svalbard August 7-10, 2017.

The third day of the Svalbard trip, we got to travel to Pyramiden, an abandoned Russian community. We took a boat out to the community, and got the opportunity to explore it with a guide. 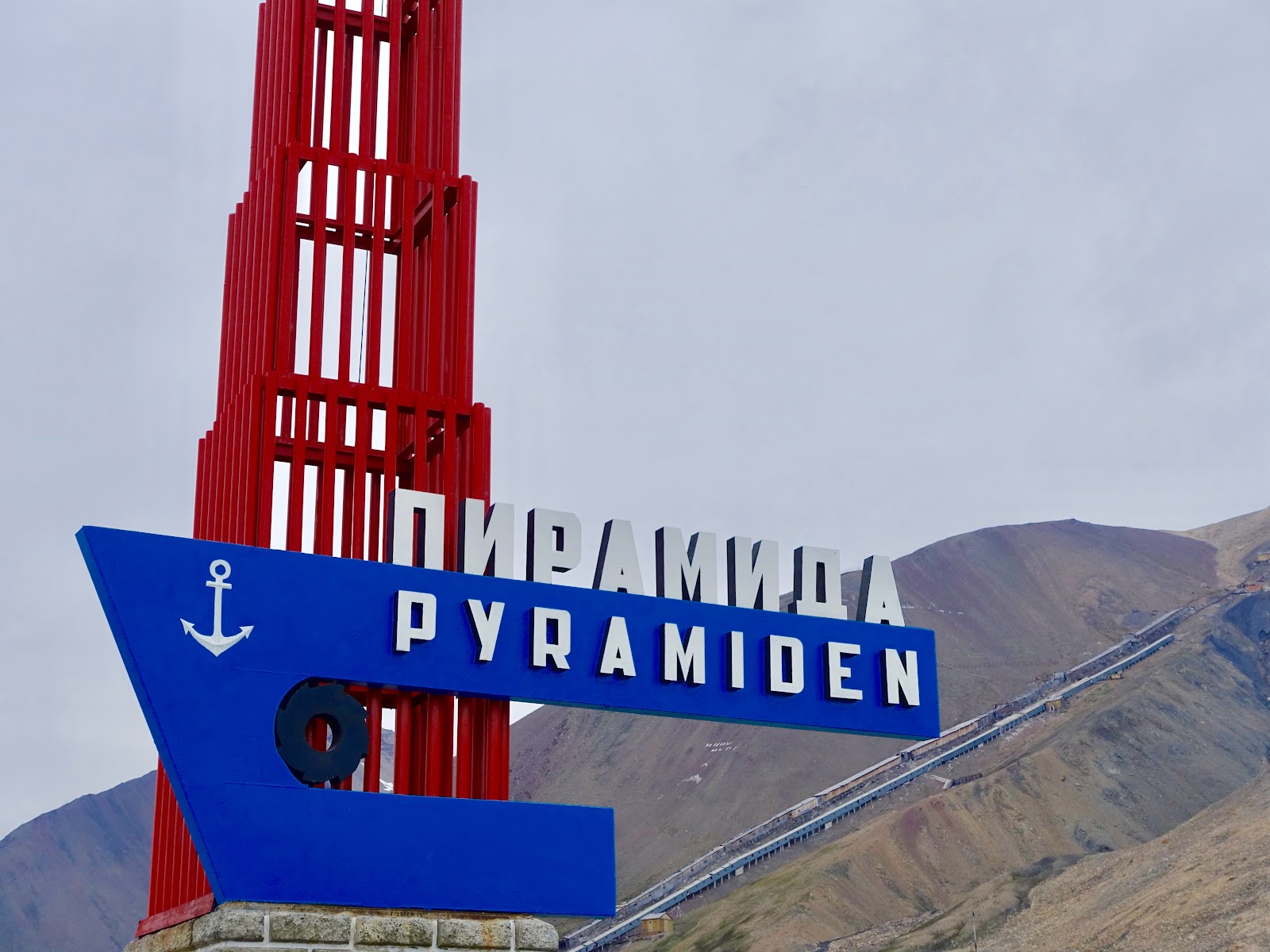 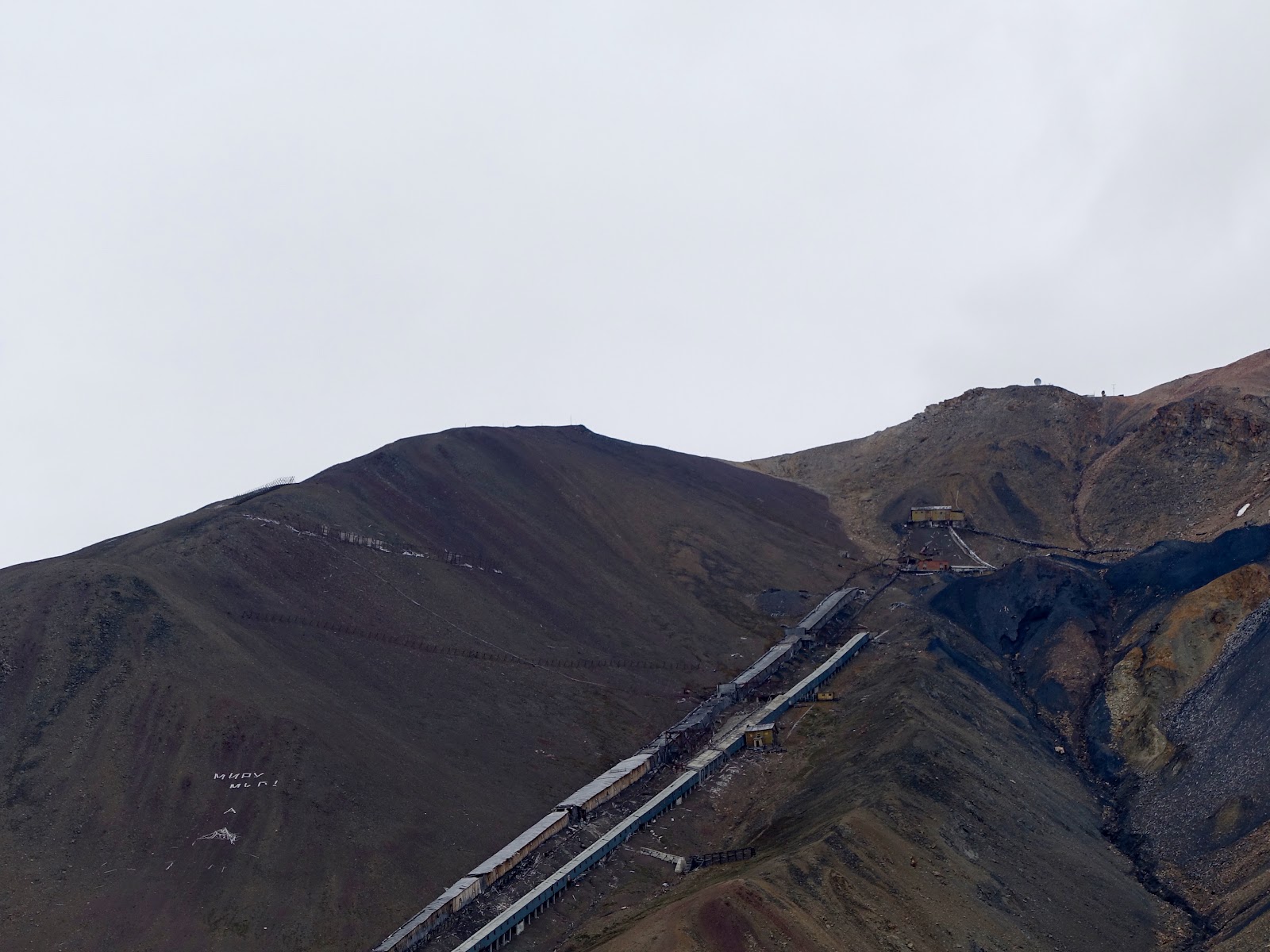 One of the first things the guide pointed out to us, was the highest mountain top’s resemblance to a pyramid, thereby the name of the location. To the mountain’s left side, we spotted the coal mine that once provided the Soviet community a good life. To the left of the coal mine’s entrance, coal miners had laid out wood in the shape of the Russian words “миру мир”, which is translated to “Peace to the World”. 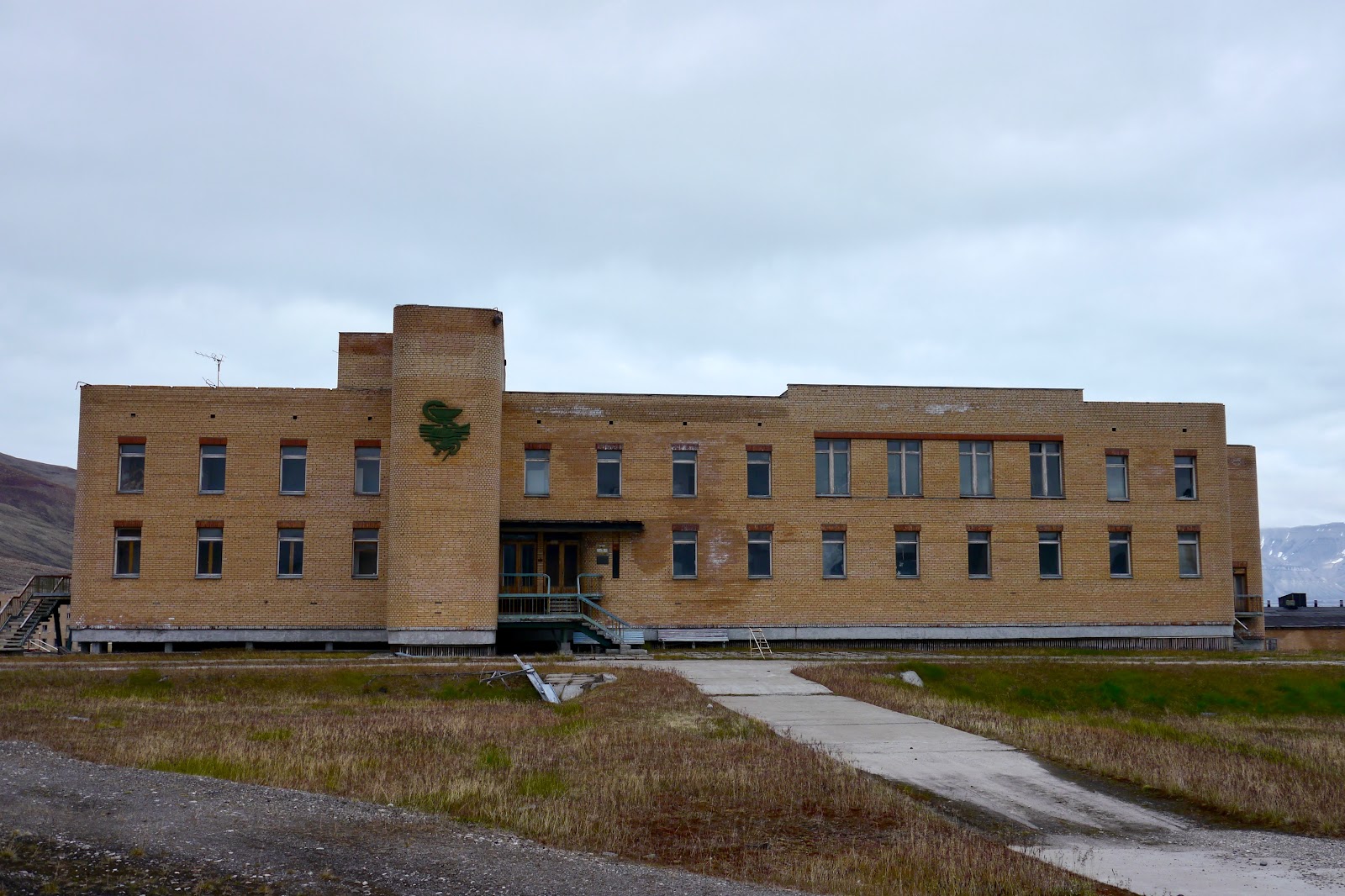 After a while, we walked past the old hospital. During the golden age of Pyramiden, the hospital was known to be of great quality. However, the hospital is now abandoned, as the other buildings. The only thing different about this building is the fact that no one is allowed to enter it. When people opened Pyramiden for tourism, they got keys to all the other buildings in the community, but with a strict order to stay away from the hospital. 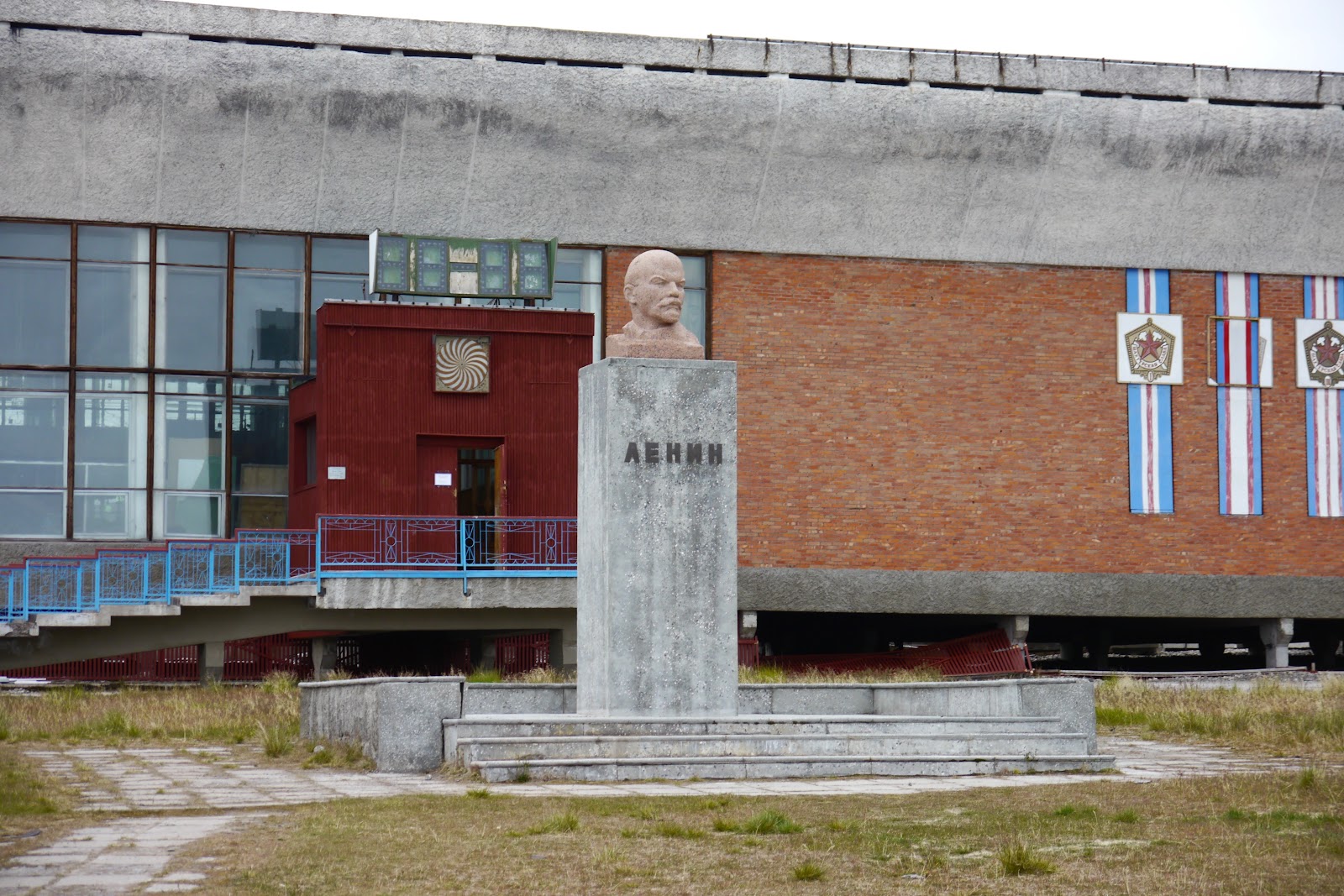 After a short minute minute of walking away from the hospital, we stood in front of the culture hall in Pyramiden. In front of the building stood a tall pillar with a statue of Lenin’s head. Under the head, his name (ленин) was written in russian. This statue gave us a feeling of really being in Russia, something that was probably the intention. It’s the northernmost statue of Lenin in the world, and it certainly made an impression. 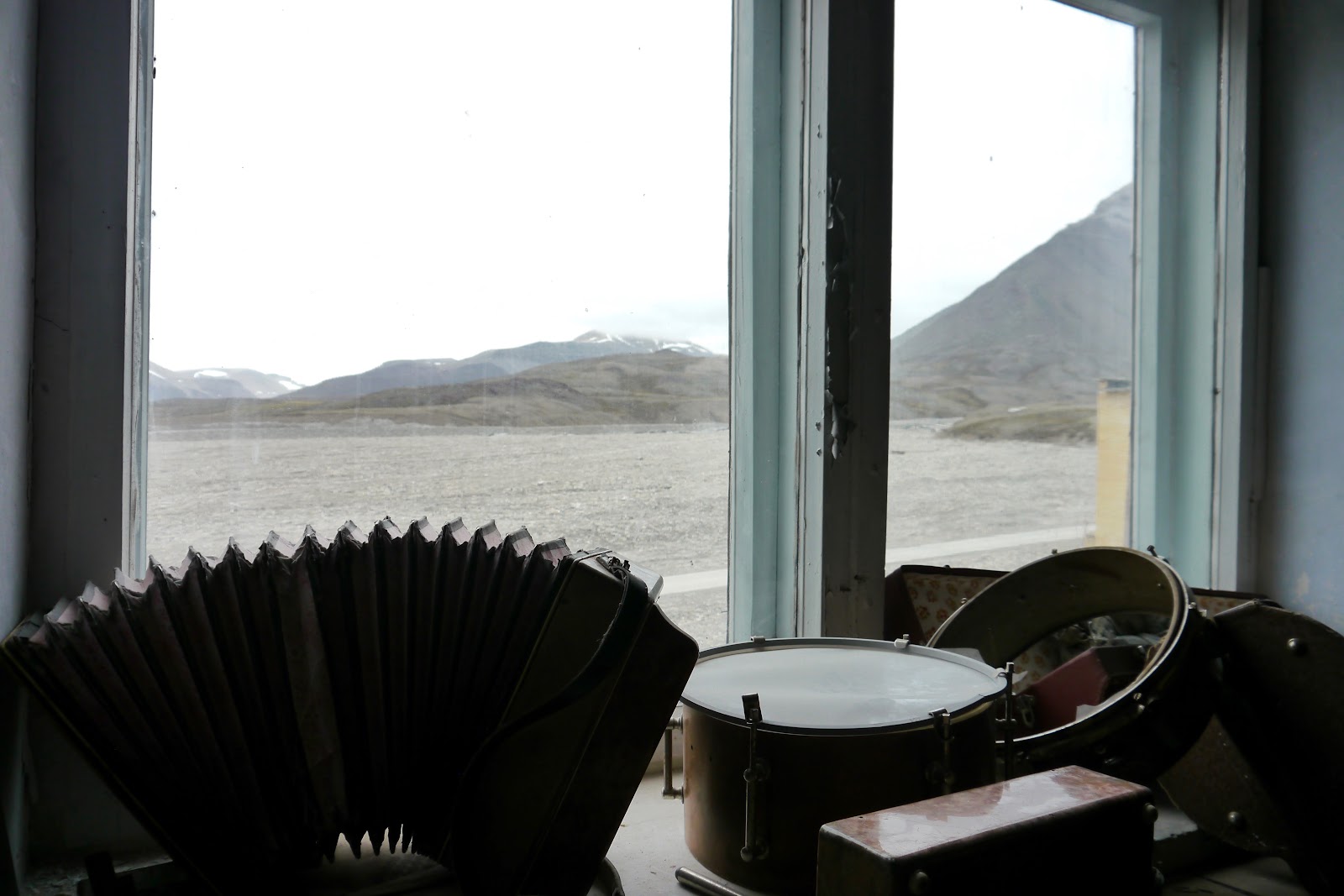 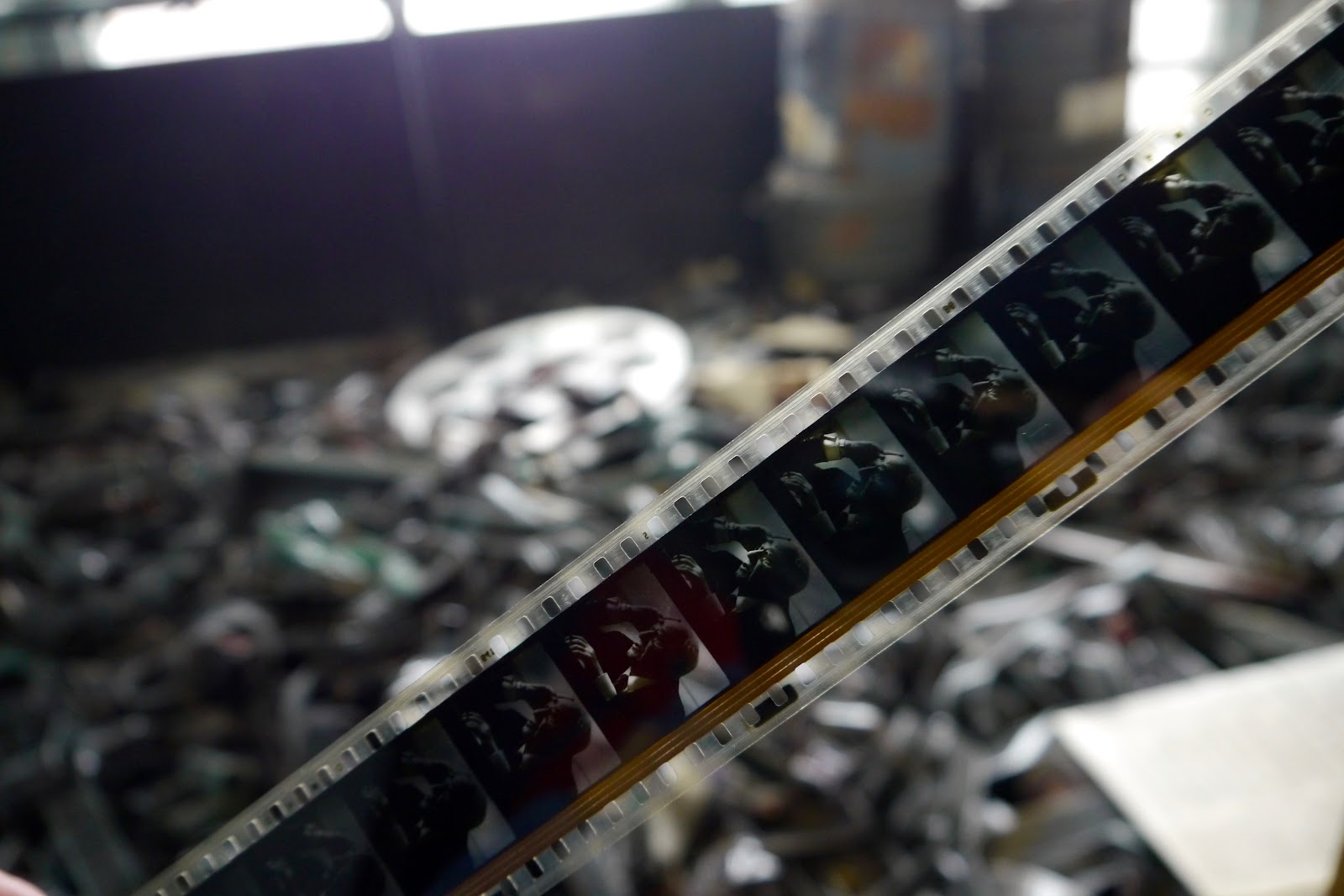 We got the opportunity to explore the culture house in Pyramiden, something that was quite extraordinary. The culture house was the main gathering place in Pyramiden. It had a gym, a cinema, a dancing room, musical instruments and so on. The community also had a swimming hall with warmed water from the ocean. Having all of this in the small community of Pyramiden was not strictly necessary, however, the russians wanted to prove a point. They wanted to show everyone how russians took care of their people. As mentioned before, everything in the community was free. Because of this, Pyramiden became the symbol of Socialism the russians wanted to spread. At the greatest time of Pyramiden, Longyearbyen was still a tiny community with only a small number of inhabitants, so Pyramiden became the perfect example of russian superiority. However, Pyramiden doesn’t only work as the perfect socialistic community. It also was a way for the russians to keep some part of their culture at Svalbard. 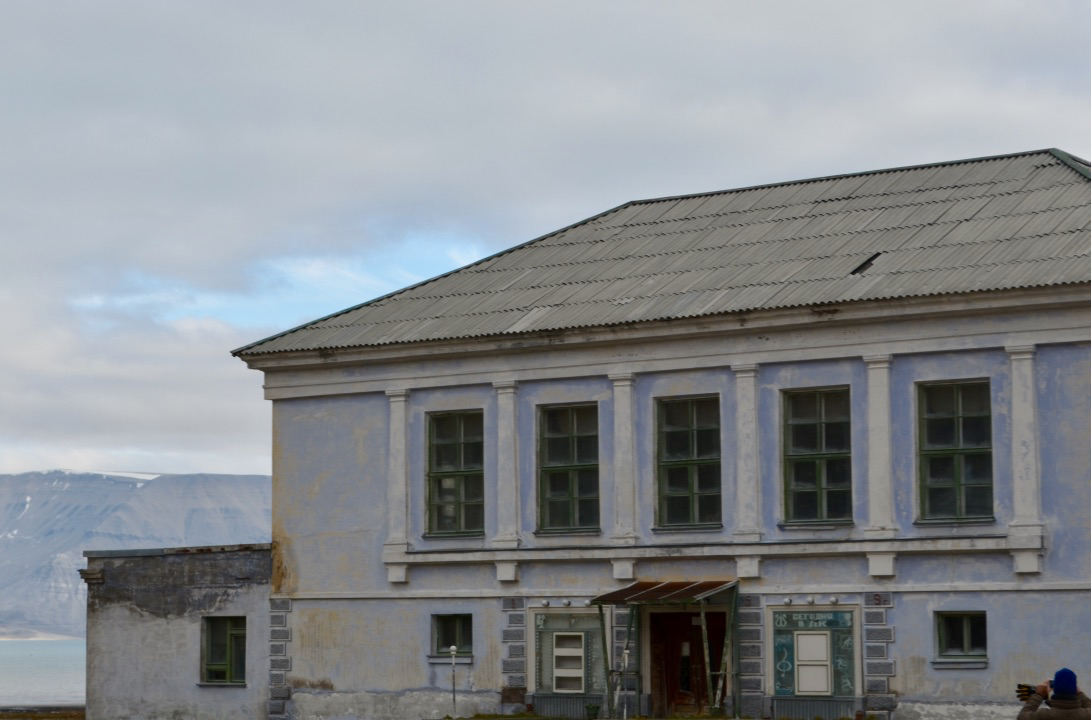 In the second building we were allowed to enter, there was a large dining room, with a capacity of 150 people. The building also featured a kitchen, and a huge and stunning mosaic. This was the only place residents of Pyramiden could get food. There were no grocery stores in Pyramiden. Meanwhile, food in this cafeteria was free. 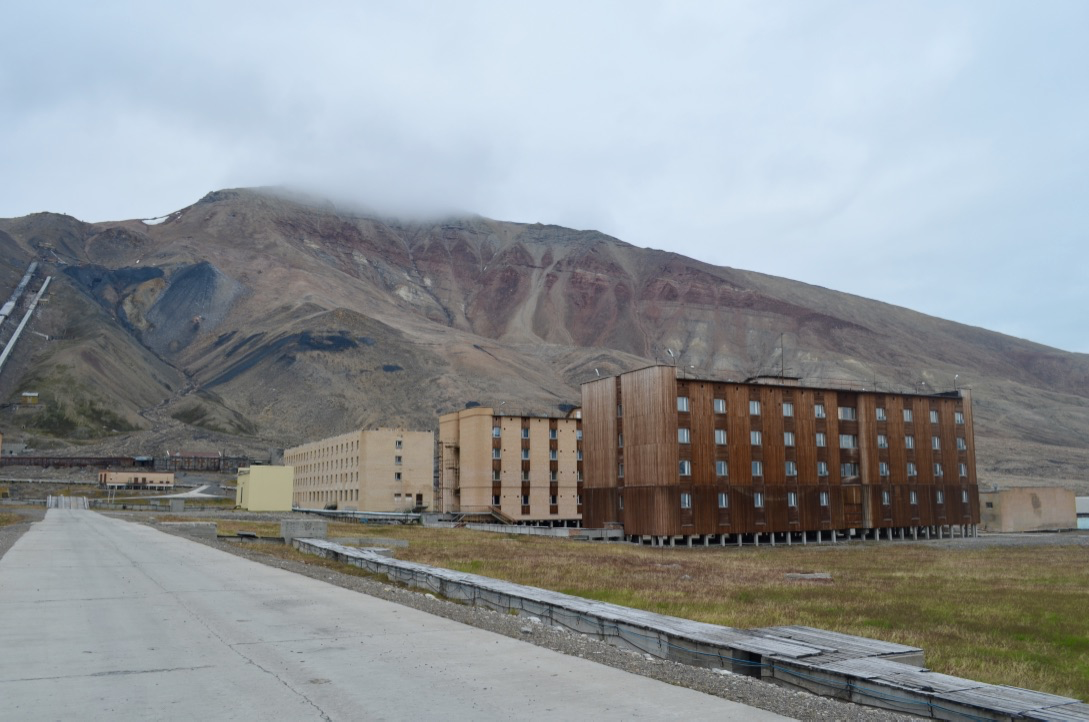 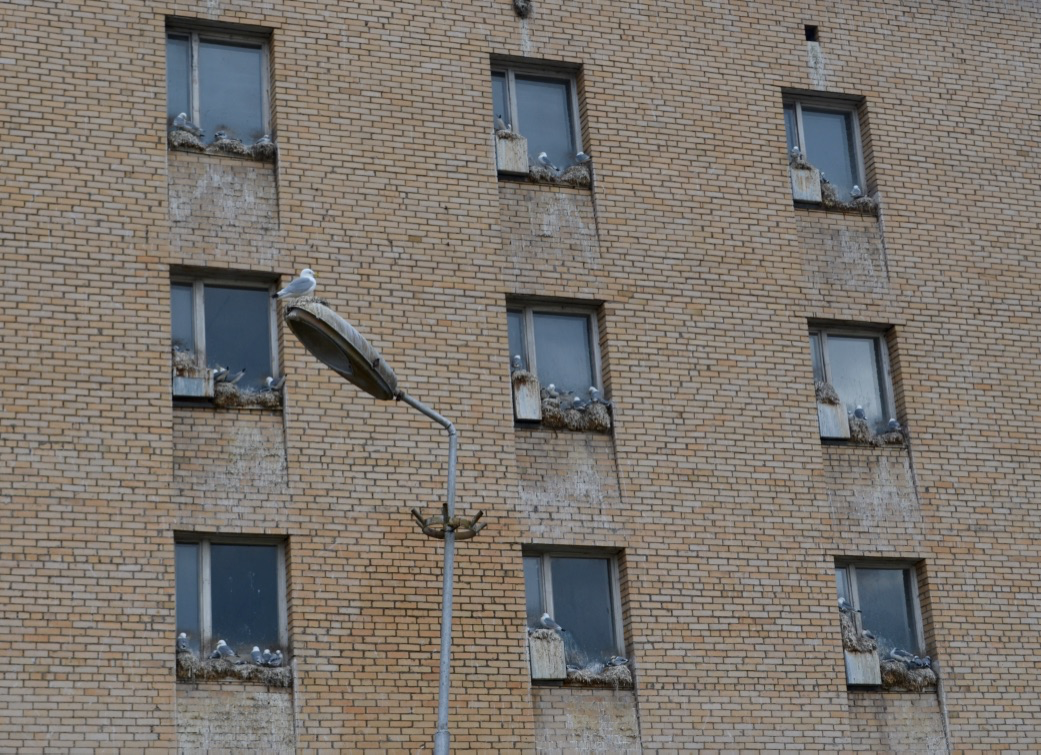 In Pyramiden, there was a building called “London” (closest on the picture), which was were bachelors lived. There was also a building called “Paris”, where unmarried women lived. When people got married and had children, they had to move into the “Crazy House” (furthest away on the picture). The name was given to this building because of all the noise and screaming children. Today, it is the home of seagulls, that coincidentally also scream and are quite noisy. None of the apartments in Pyramiden had kitchens, since the residents could only get food in the public dining room. 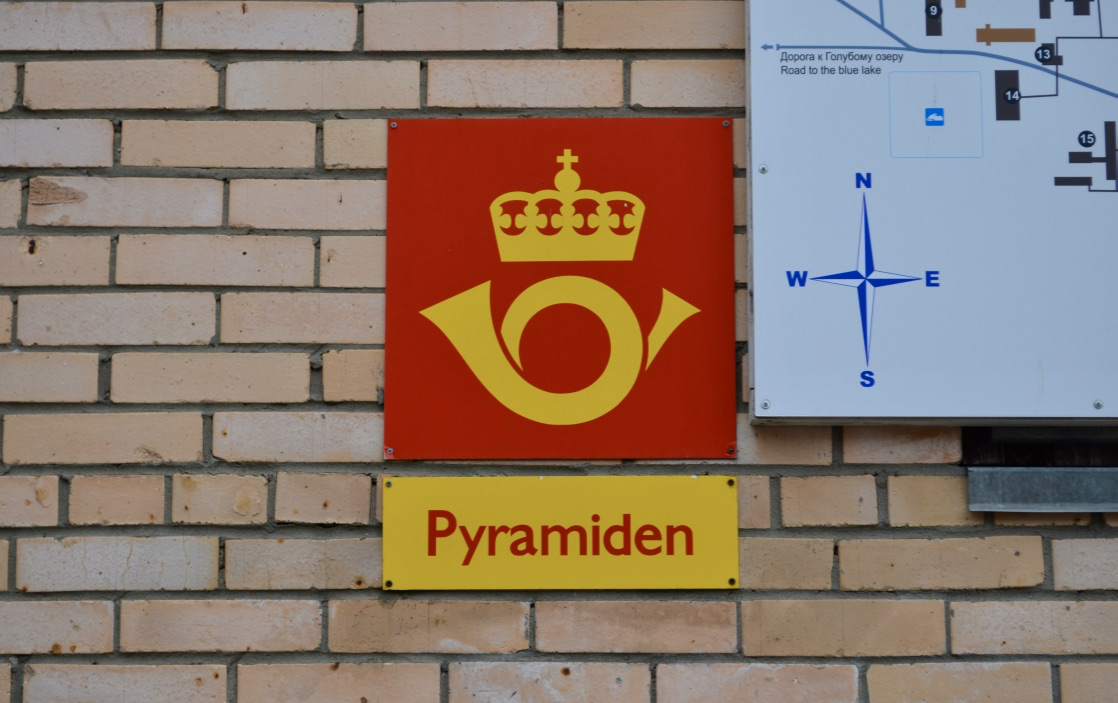 The building between London and Crazy House is today a hotel (for those who dare to sleep in an abandoned village), featuring a post office with souvenirs, and a dining area. While we were there, we could buy Russian pastries and drinks. We could also stamp our passports with Russian stamps from Pyramiden. 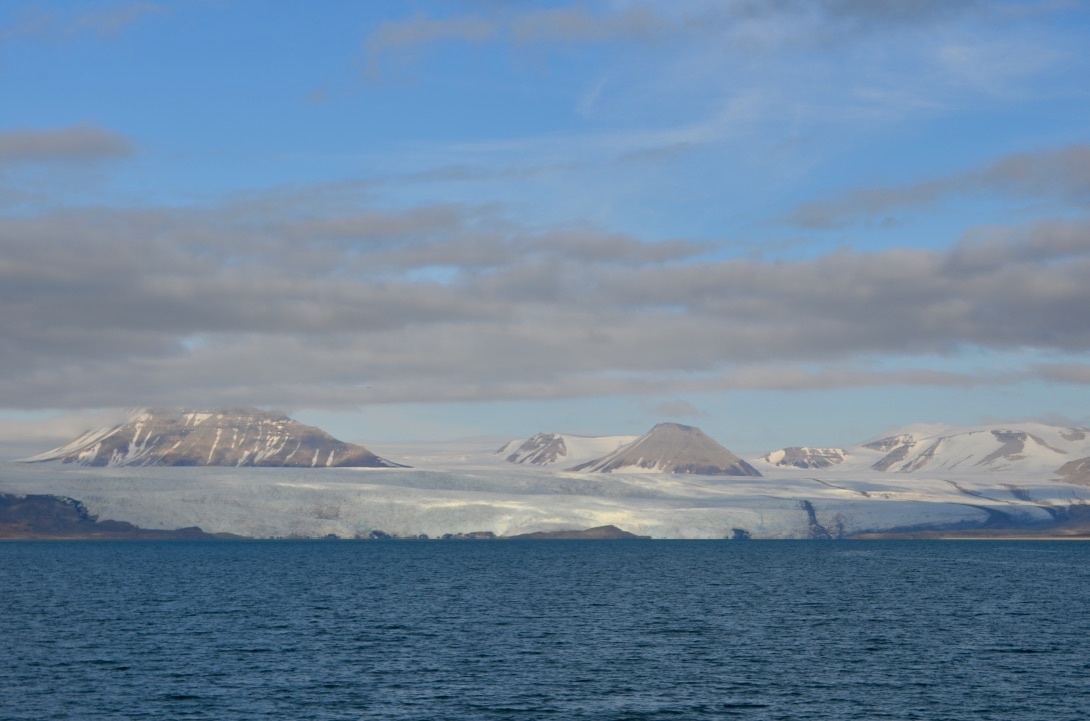 Returning to our boat, the sun started to appear, shining on the glacier so that it looked stunning. On our way back to Longyearbyen, we witnessed some of the amazing wildlife which is only/mostly found in the Arctic. We saw loads of puffins, struggling to take off as our boat approached them. We also saw a white lump on a rocky beach, which turned out to be a small huddle of polar bears. 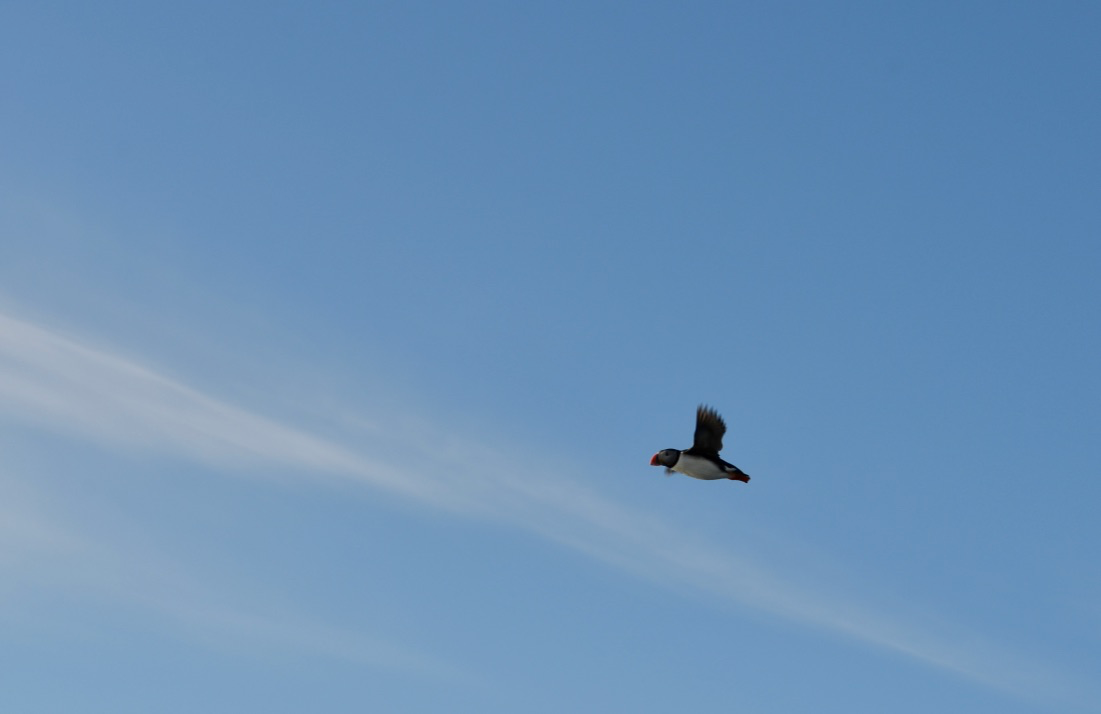 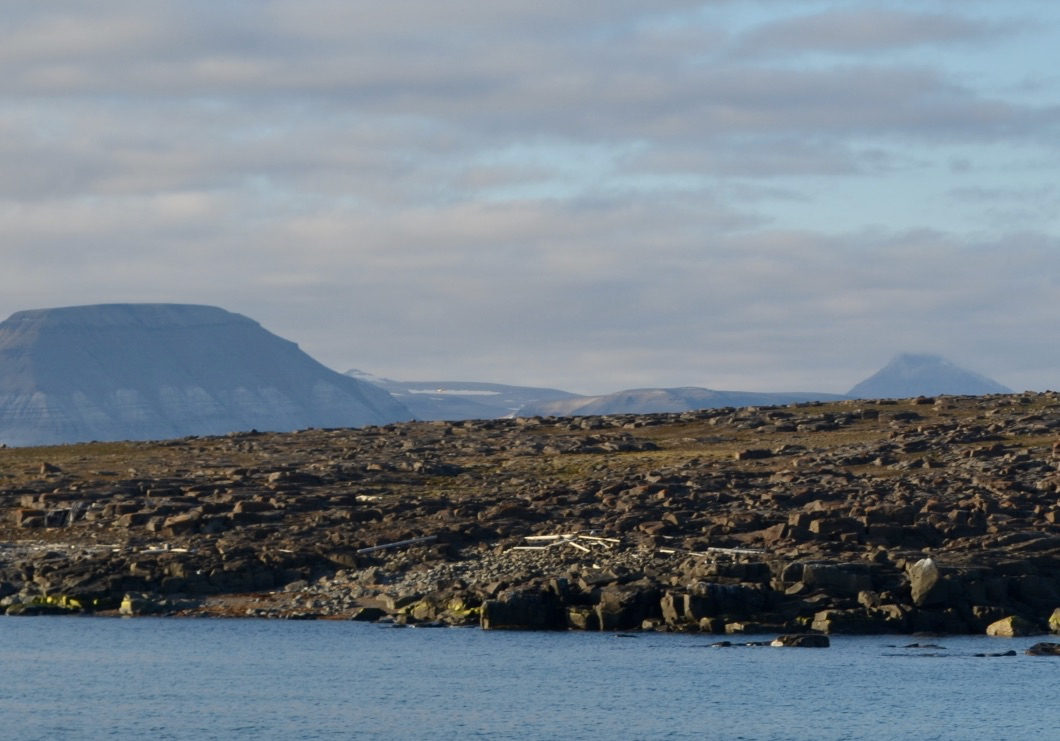 Can you spot the polar bears? 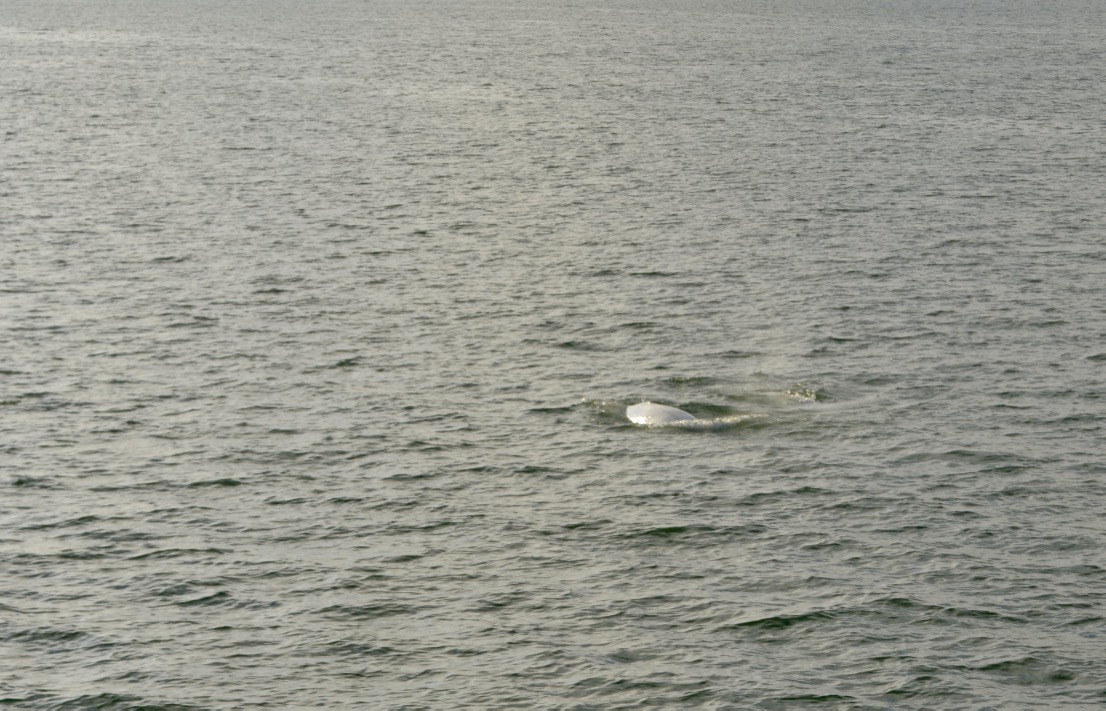 In Isfjorden, when approaching Longyearbyen, we saw a group of Beluga whales. The sight was beautiful – sun glistening in the water and on the backs of white whales, sprinkling water out of their blowholes as they breathed. It was truly the perfect end to an amazing and enriching trip. 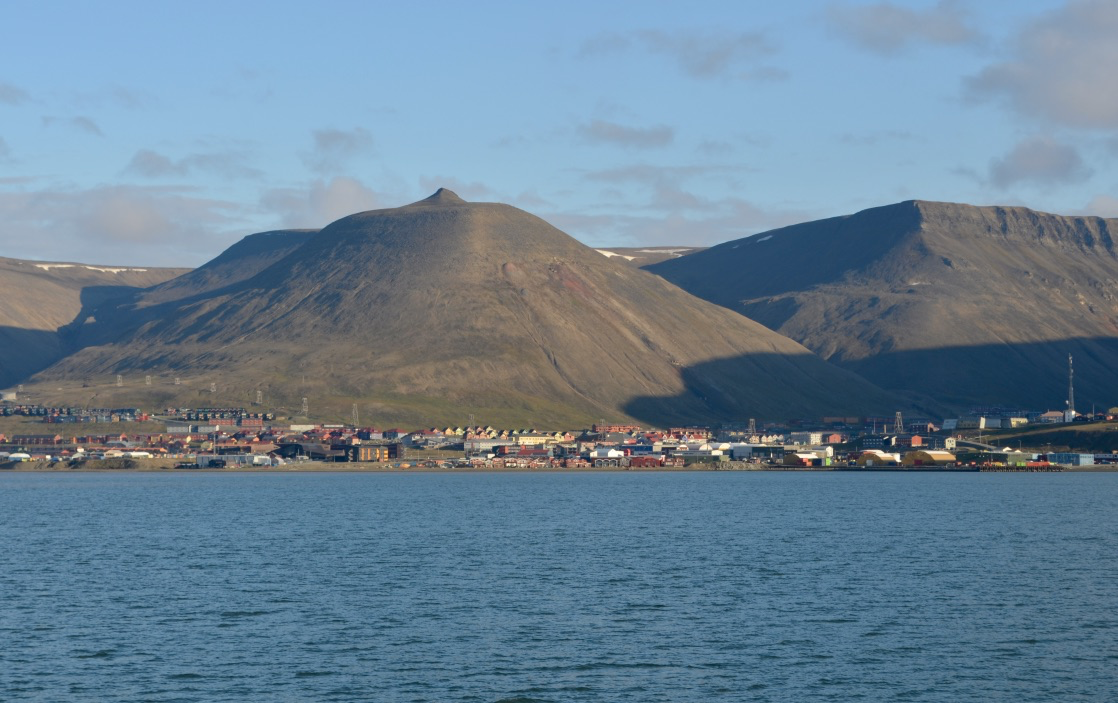 Longyearbyen in the evening sun.